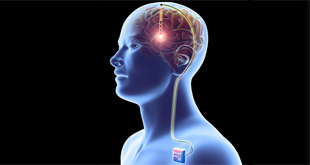 Parkinson’s is an incurable neurodegenerative disorder that affects more than 7 million people worldwide. Medication can help, but over time it tends to become less effective. For patients in advanced stages, one treatment option is deep brain stimulation. In this procedure, a surgeon implants thin electrical leads into the region of the brain that controls movement. The leads are connected to a pulse generator— similar to a pacemaker for the heart—that is placed under the skin below the collarbone. This implant sends electrical signals to the brain to help cure some symptoms caused by Parkinson’s. This procedure is really invasive and can take 10 to 15 hours to complete, it’s also very expensive, and not all patients qualify for the surgery.

To give these patients another in-home option, Johns Hopkins graduate students have invented a headband-shaped device to deliver noninvasive brain stimulation to help tamp down the symptoms. The 5 student team members were inspired to build the new device after observing neurosurgery being performed on Parkinson’s patients at Johns Hopkins Hospital. The students aimed for a prototype that would enable a patient to activate the battery-powered treatment by touching a large easy-to-press button. With patient safety in mind, the students designed their prototype to deliver current for only 20 minutes daily and only at a doctor-prescribed level.

The device has not yet been tested on humans, but it is viewed as a promising first step toward helping Parkinson’s patients safely relieve their own symptoms at home or elsewhere without going to a hospital or doctor’s office.

Another Johns Hopkins team is taking over the project to further enhance the design and move it closer to patient availability. One addition may be a wireless connection to allow a doctor to adjust a patient’s treatment level from a remote location.

Powered and designed by Webliana
© Сrupp.org. copyright 2023. All Rights Reserved