Acute heart failure (AHF) is one of the most frequent complications of acute myocardial infarction (AMI). It is not only associated with a several-fold increase of in-hospital mortality but also, worsens the long-term survival in comparison to those without AHF. The AHF is observed to be more in AMI patients whose in-hospital stay is more than 3 days. The clinical implications and prognostic accuracy of the AHF term in the setting of AMI are yet unknown.

Methods:
We observed 1,104 consecutive cardiac care patients, who were admitted with ST-elevation AMI (STEMI). They were divided into groups according to the AHF presence {AHF(+) n=334 and AHF(-) n=764}. Among 334 AHF(+) patients: 252 patients were found to have a transient AHFt(+), whereas 82 of AHF(+) patients had persistent AHFp(+) during the in-hospital period. Patients’ baseline characteristics, blood analysis, left ventricle (LV) and renal function data were assessed and analyzed on the admission day and 10th-day post-admission. The follow-up was conducted on the 30th day and after 2 years.

Results:
STEMI patients accompanied by AHF(+) were older, presented mostly with anterior AMI (p<0.01), had lower LV ejection fraction (EF) (p<0.01) and a higher heart rate (p<0.05). Their rates of comorbidities and of in-hospital complications such as recurrent angina, reinfarction, LV aneurism were higher in comparison to AHF(-) patients. AHFp(+) patients had the shortest time from symptoms onset before thrombolysis in comparison to AHFt(+) and AHF(-) groups. Partial recovery of cardiac function according to Left ventricular ejection fraction (LVEF) and end-systolic volume index, occurred mainly in AHF(-) and AHFt(+) patients on the 10th-day post-admission, but not in AHFp(+). STEMI patients with AHFp(+) demonstrated a larger infarct size, higher C-reactive protein, and VGEF level, fasting glucose and heart rate on admission, higher erythrocyte sedimentation rate, absence of heart rate normalization on the 10th-day post-admission. All of these markers were the signs of severe myocardial damage and inflammation, which can reflect a worse recovery in AHF patients despite optimal management. Patients with AHF(+) had renal dysfunction on admission while its creatinine clearance (CrCl) decreased during the in-hospital period which is the reflection of a poor prognosis. Сardiovascular mortality and nonfatal MI were significantly higher in the AHFp(+) group as compared to the AHFt(+) and the AHF(–) groups during the 30 days and 2 years of follow-up. 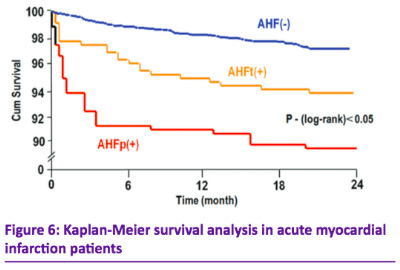 Conclusion:
The AHF is a frequent STEMI complication. AHF lasting >3 days had worse short- and long-term prognosis. Therefore, an aggressive strategy should be recommended particularly in patients who have clinical signs and symptoms of persistent AHF.